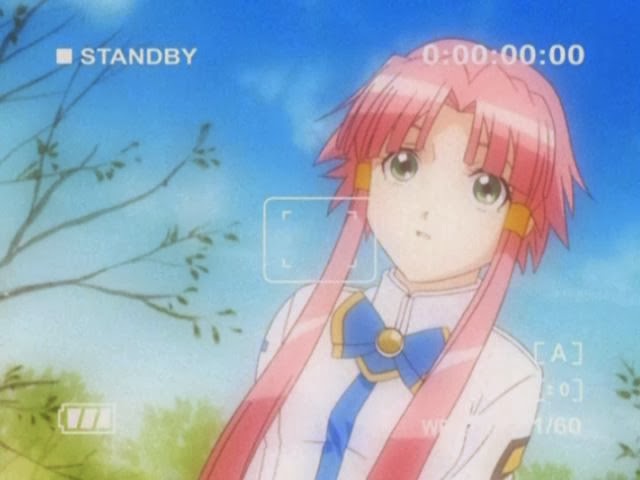 The year ends with a surprise visit from a friend. Ai is excited to meet the people she had read about in Akari’s letters. Her tour of Neo-Venezia even includes a visit to one of the mysterious alleys that’s hidden to most people where they meet a ghost from the past. The cat that appeared as a human had asked Akari to deliver a letter for her. She also had to receive the message, because it’s original had died long ago. But it still had meaning to her as someone living in the world they created. Each year that goes by is a page in a letter written for future generations to read.

Akari wrote her so Ai would understand how much she loved Neo-Venezia. Because Ai will become an apprentice undine herself one day, and follow in Akari’s footsteps, it’s as if she’s been reading her own future. Unlike the messages of history, Ai is able to meet the people who are preparing her place in the city. The people of the past are separated by time. But by the magic of Aqua, Akari is allowed to cross an unpassable bridge. 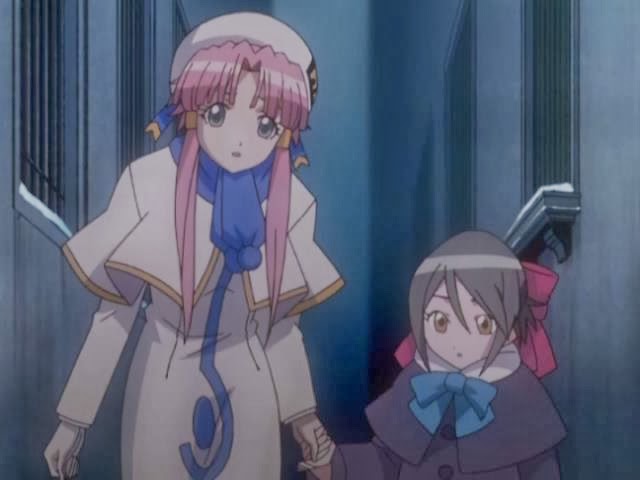 Alicia tells her that the bridge used to be a place people visit out of nostalgia. There are prettier landmarks in Neo-Venezia. Why would a visitor want to see a run-down bridge? A covered bridge doesn’t fit the image of Venice. What it provides is a reminder of the ambition of the people who built Neo-Venezia. The excitement Akiko feels is in seeing the young children who are watching the city be born. It also comes from the patience of the older settlers. They won’t live to see their creation fulfilled, but are happy knowing that the next generation will take what they started and carry it for a time before passing to their grand-children. 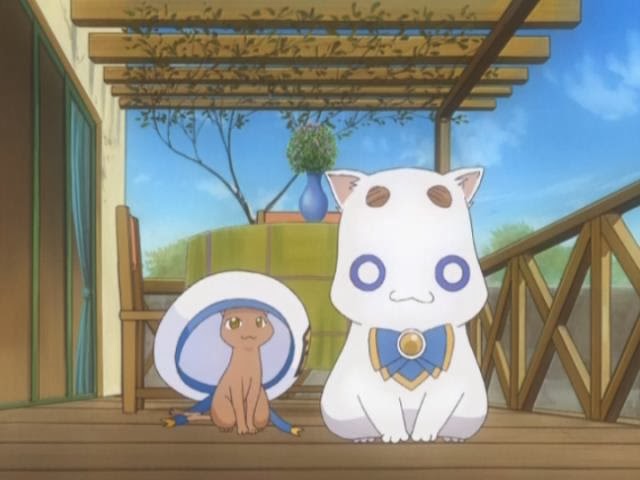 The story of Aqua is the story of Aria Company. What Grandma began was continued by Alicia who leaves it in Akari’s care. Even Ai, having learned from Akari’s letters, will think of the child Aqua as she takes her place in this continuing saga. And if we turn the pages backward to before there was an Aqua then it must have started when someone on planet Earth looked to the sky and thought, “What letter can I write for future generations to read?”

Or perhaps she just said, “Happy New Year.” It means the same thing. 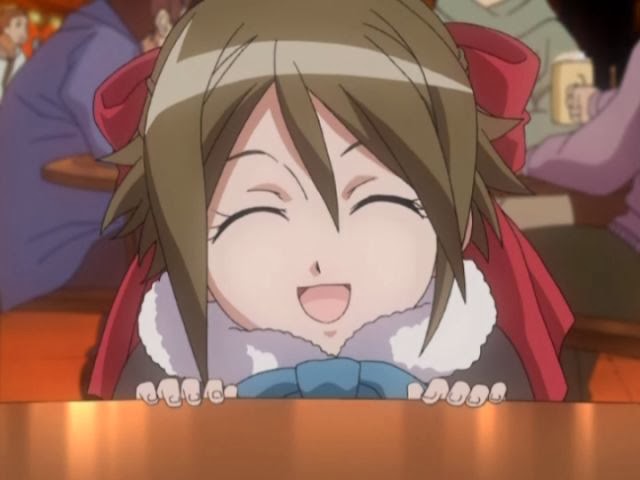 This is the last week in my year of Aria. The experiment to watch the series out-of-order was not as successful as I thought it might be. I admit to forcing this week’s two episodes to be the last. But Aria is enjoyable no matter how you approach it. This way I could see contrast between the earlier and later episodes, and also the similarities or when an event had been set-up by something that happened earlier.

The staff and cast of Aria have reason to be proud. Although there will not be any more Aria, Kozue Amano continues to write the charming and uplifting manga Amanchu!. Satou Junichi has gone on to direct many other “healing” anime such as Tamayura. (A story I describe as being about Akari’s great-great-great-great grandmother.) It seems to me that everywhere I look I hear Chiwa Saitou’s voice. And who cannot help but think of Alicia whenever Sayaka Oohara laughs?

But most of all I remember Tomoko Kawakami and Eri Kawai. The time we’ve been given can be taken from us easier than we’d like. As you turn the calendar to a new year, do your best to treat every day as wonderful encounter.

Thank you for reading.
No comments:

Aria the Natural #17: After That Rainy Night… 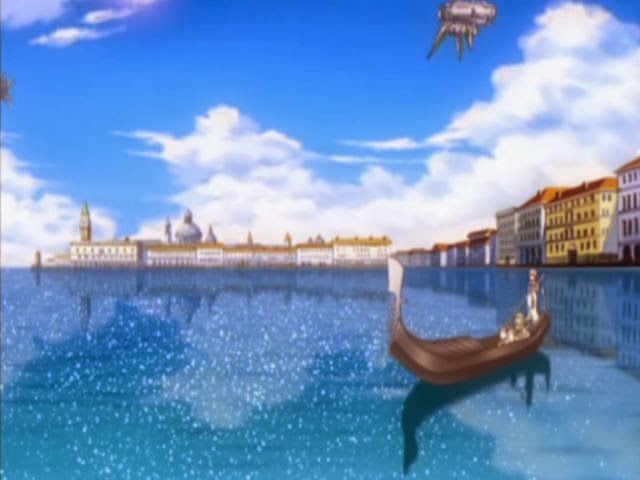 The long, cold nights of winter are a time of introspection. Families around the world gather for large meals, gift giving, and celebrations of the year past. Akari’s new gondola is stronger and prettier. The boat itself is easily replaced and not worth having an attachment to. Where her affection comes from is her past experiences with the gondola. It reminds of things she’s learned, enjoyed, or was frustrated by. She shares those memories with Alicia who relates her own adventures with the gondola. Their similar memories let Akari feel more closely connected to the people around her. Festive gatherings and hearty meals keep us from feeling cold in the winter. And so sharing her memories keeps Akari from feeling alone in Neo-Venezia. 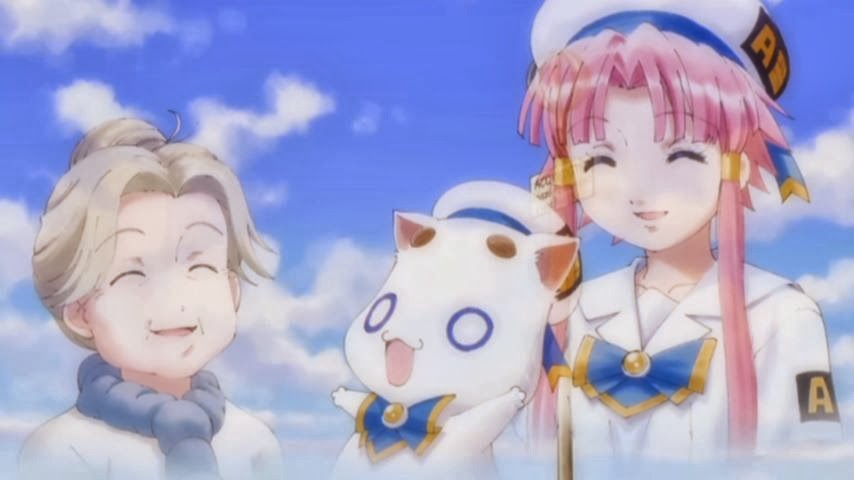 Prima Akari is having some not unexpected growing pains as the new head of Aria Company. Grandma urges her to visit Alicia. Akari doesn’t want Alicia to worry about her. What she hasn’t realized is that Alicia is going to be concerned regardless. After four years together, she wants to know how her former apprentice is doing even if it isn’t all good news. Akari doesn’t have to be ashamed to ask for advice because she won’t be an apprentice asking her teacher but asking as a friend.

For the final week of the year I’ll watch Aria the Animation #12 & #13: That Soft Wish… / That White Morning…. Have a merry Christmas!